Whatever happens at the same time on the same topic on both sides of the Atlantic is likely connected. Now I read that Infowars and author Roger Stone are under FBI investigation on alleged Russia connections. And when I turn to the Austrian (Bilderberg) daily „Der Standard“ they inform that dossier.at exposes Russian cash flow into the EU.  While on Infowars Alex Jones explains once again what is behind and why alternative media are in the focus American readers might not be familiar with the way the Soros / covert interference pattern unfolds in Europe.

„Der Standard“ forgets to mention that dossier.at is a member of the Soros funded Global Investigative Journalists‘ Network and focuses on framing issues and politicians who are against the globalists‘ goals. This means it is about „refugees“ and mocking on domestic culture and politics far beyond legitimate critizism. So dossier does research for a series on private TV on silly and ridiculous experiences with lolitics, administration and politics. In this way they target a member of the federal state government in Burgenland who was as a defense minister against US military interventions and the (global) missile defense system. But to counter such disinformation you either have to know a lot or do a lot of research which is done with more outreach in the US by Inforwars and others (so they are smeared). 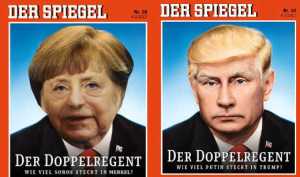 A fake and a real Der Spiegel title

In the first moment I thought of another (non) „independent“ journalist network which published the „Panama Papers“ in April 2016. „With George Soros against Wladimir Putin“ was my conclusion as the leak was distributed via the International Consortium of Investigative Journalists financed f.e. by Soros and the Ford Foundation. As today the Organized Crime and Corruption Reporting Network is involved which is according to former CIA agent Robert David Steele in the „Panama Papers“ case part of „a US Government / George Soros Covert Action Against Putin“ (a now? US shadow government and Soros?). Only selected media (whose journalists are in this network) were granted access to a purported huge ammount of data, among them „Süddeutsche Zeitung“ (Germany) and „Falter“ (Austria). To no surprise such media outlets are pushing the globalist agenda and bashing those who stand up for national souvereignty.

The biggest defender of the nation state at present is the Russian president as Donald Trump still has to fight the deep state and various covert Soros influence. Former British ambassador in Usbekistan Craig Murray (who now works for Wikileaks and knows who leaked material from the Democratic Party) in 2016 said what the „Panama Papers“ were about: „But why focus on Russia? Russian wealth is only a tiny minority of the money hidden away with the aid of Mossack FonsFRT

eca. In fact, it soon becomes obvious that the selective reporting is going to stink. The Suddeutsche Zeitung, which received the leak, gives a detailed explanation of the methodology the corporate media used to search the files. The main search they have done is for names associated with breaking UN sanctions regimes. The Guardian reports this too and helpfully lists those countries as Zimbabwe, North Korea, Russia and Syria. The filtering of this Mossack Fonseca information by the corporate media follows a direct western governmental agenda.

There is no mention at all of use of Mossack Fonseca by massive western corporations or western billionaires – the main customers. And the Guardian is quick to reassure that ‚much of the leaked material will remain private‘. What do you expect? The leak is being managed by the grandly but laughably named ‚International Consortium of Investigative Journalists‘, which is funded and organised entirely by the USA’s Center for Public Integrity. Their funders include Ford Foundation, Carnegie Endowment, Rockefeller Family Fund, W K Kellogg Foundation, Open Society Foundation (Soros) among many others. Do not expect a genuine expose of western capitalism. The dirty secrets of western corporations will remain unpublished.“ If you look at the logo of Mossack Fonseca it reminds you of – what? Right – of the logo of NATO, the North Star.

CNN fails to mention that the US interfered in 81 elections  when reporting from the US Senate hearing. „US is in a ‚glass house'“ as Wikileaks posted on Facebook. For Murray and others it is clear that covert actions to steer the outcome of elections and referendums is common intelligence practice (as shown here concerning MI 5 and Scotland). When there are NO connections between Trump and Russia you might try to get Trump supporters framed as they play a vital role in making attempts to isolate him fail and the whole issue isn’t very logical. Everything is a question of proportions as Russian intelligence IS active in other countries (whose intelligence is NOT?) but there is no constant effort to undermine society in order to create majorities for open borders and to cause riots to destabilize.

And you don’t need a Global Investigative Journalists‘ Network or an International Consortium of Investigative Journalists to connect the dots when the pattern unfolds in the same way everywhere. It is only a bit stressing to watch what is happening in different corners at different levels but you know that it fits into the scenario. That spring has begun and temperatures are rising in Europe is marked by growing arrivals of migrants f.e. in Greece – it are no refugees but illegal immigrants which should change the face of Europe forever. There is no Russian engagement with countless counter-NGOs, -conferences, -experts, -institutes, -legal initiatives, -media funding, -networks etc. This expresses more economic conditions than moral as Russia’s budget can be compared not to the US and its billionaires but to European states like Italy. And of course Russian state owned media like RT or Sputnik perform successfully in the West as disappointed folks turn towards them tired of mainstream propaganda.

When German Chancellor Angela Merkel visited President Trump one commentator commented on mainstream reporting that it was like we view an episode of „The Bachelor“. How did they treat each other, and did Trump really refuse to shake Merkel’s hand? It is interesting that avoiding to shake a woman’s hand expresses disrespect when (some) Muslim men meet female representatives – did media play with such associations? At least US media like MSNBC promote the „best leader of the world“-narrative Germans and Europeans are so tired of. When Merkel and Trump held a press conference he said „we have one thing in common“ and she ducked looking in slight fear to him (thinking „what on earth can THAT be?“) before he added „we have both been wiretapped“. In Europe media outlets once called „transatlantic“ by its critics bashed Trump and praised Merkel one more time – but it is of course a conspiracy theory that Merkel serves the deep state only due to her communist past.

PS: „Der Standard“ underlines its agenda with an article on „rich New Yorkers who want to pay more taxes“ led by George Soros. Critical postings on the real role of Soros are of course filtered; „Der Standard“ blocks more and more users (including me).