The International Women’s  Day on March 8 was the next step in a series of protests aimed at removing Donald Trump from the White House. The idea to call for a women’s strike is not new but this time it should show the new administration what America would be without the work of women. The Women’s Strike website includes an Instagram feed where we see a picture from a protest for opposition leader Chuck Schumer. We can assume that none of these women was aware that she demonstrates for the deep state and not against an alleged „sexist“ as president.

Mainstream media’s function is to create a specific narrative which is now destroyed by exposing the CIA’s cyber war via Wikileaks. Part of it is to support every kind of protest so The New Yorker wrote on March 7: „Tomorrow is the Women’s Strike, the fourth of ten actions that have been called for by the organizers of the Women’s March on Washington. The strike was planned to coincide with International Women’s Day, and the march organizers, in tandem with a team organizing protests in forty countries around the world, have asked women to take whatever form of action their lives allow for. Take the day off from “paid and unpaid labor,” including housework and child care, if you can, or avoid shopping at corporate or male-owned businesses, or simply wear red in solidarity. There will be rallies in at least fifty cities around the United States.

Protest for Schumer as women’s representative

Comparisons between the strike and the post-Inauguration march—now estimated to be the largest political demonstration in U.S. history—are inevitable, and likely to be unfavorable to the strikers.“ It is clear that the Women’s March can’t be outnumbered and that people get tired by series of protests. Those who follow Saul Alinsky’s  „Rules for Radicals“ (mostly without knowing that?) should read rule 7: „A tactic that drags on too long becomes a drag.” Which means: Don’t become old news. Some found it counter productive to stay away from your job in order to show your value,  There is nothing to say agaist striking for women’s rights and issues as Switzerland or Iceland show. The strike on March 8 of course aimed at supporting anti-Trump and pro Obama-/Clinton-forces.

If you didn’t want to attend a rally you could express your support to other woman via #followwoman or #SheInspiresMe on Twitter. While Twitter sorts positive feedback on Donald Trump out so he reads negative reactions first (mostly several posts from the same user) the short message plattform gets advice from Anita Sarkeesian. She is a classical fake feminist who created with the help of MSM a victim myth based on reactions to her video game critics which she used for fundraising. Or was she like many others built up via media to replace competent female voices and to set the pace for a narrative? And no wonder Twitter is „inspired“ by Lena Dunham, one of many nearly hysterical anti-Trump feminists. Like Rosie O’Donnell she seems obsessed by Donald Trump as if there is some kind of disappointing personal relationship. Camille Paglia suggest women like Dunham mask neurotizism as feminism and have problems with their body image. 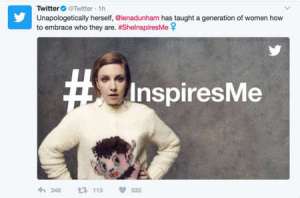 Feminism once was about women can do everything they want to and to attack absurd male privileges (from men for men see fight for the right to vote). Now it should be „true“ feminism to favor Muslim immigration and to place male „refugees“ above yourself; to feel extremely vulnerable not to real violence and existing discrimination but to words and thoughts of others. Though many women entered non traditional fields where they are successful and earn their living this hasn’t touched the field of mainstream feminism. Or put it the other way round: such women don’t have the time or the nerves to discuss with women who feel themselves competent on every issue because they read something in a newpaper. Or because they choose gender studies‘ degrees, which have increased per 300% in the US.

The same picture in Europe: when it comes to public debates at least one, often two participations visited gender studies‘ courses. Every female expertise from jumping into could water, studying something „uncommon“ for a woman or getting elseway involved in something non traditional is ignored. The gender model must apply to every situation, to every working environment regardless the real circumstances. While woman who have an interesting and demanding job are often bored by female friends who define themselves via their partner and live through him it might be the same with many „Pussyhat“-feminists. Just twist it around and you see – women occuped with men but under a negative aspect. There is no place for the analysis of patriarchal structures and different patterns of male and female behavior but grown hatred for „white men“.

„Remember, America elected a man accused of sexual assault to avoid a woman who mishandled her emails“, The Independent wrote and posted a link to the article  in reaction to Trump on Twitter. This is pure propaganda to save the narrative which hides Clinton’s disasters as Foreign Secretary and all the Clintons‘ scandals. Trump is known for promoting women in the construction business, among them Barbara Res, who was the first woman responsible for building a skyscraper. Now she sides with those who call him narcisst and misogynist although in 2013 she wrote that Trump was „the least sexist boss I ever had“. As a woman who did „men’s work“ she felt into the glass ceiling trap because she wanted to believe Hillary Clinton is a good politician.  When Trump was accused of sexual assaults she spoke out f.e. on CNN an called him a sexist. He judged women’s bodies although not when they worked for him and he complained that women were after him because of his money and power (what does this say on such women?).

After Trump has won the elections she wrote an open letter where she asks him to act like a president, suggesting that would be difficult from what she experienced in his enterprise. But she is right in many points when she tells him to understand the perspective of women better, either when they are pregnant and don’t want to get a baby or when they are harassed on their workplace. Trump unlike many male politicians is committed to a „level plain field“ for women without really imagining how women can still be discriminated. And in politics traditional role still have a vital function so less women then men are members of committees on „hard“ items than on „soft“ items. An EU study I mention here says that „basic functions“ in the 28 member states‘ governments (foreign affairs, defense, interior and justice) have 22 % female ministers while „sociocultural functions“ 42 % which is more than fhe average percentage of women in parliament.