Because Alexander Soros posted a photo of a door shield in the Austrian chancellory on Instagram the public learned that he has visited Christian Kern. MSM ignored it but alternative media reported so Robert Lugar (Team Stronach) made a parliamentary inquiry. In the answer we learn that it was the initiative of George Soros who was accompagnied by his son and other employees. Asked about Soros influence in Austria the Chancellor denied any knowledge which is clearly not true.

When I discovered what A. Soros has written („And the main reason for my slight detour to #vienna: A very productive meeting with the very impressive and relatively new head of the Austrian Government, Chancellor Christian Kern. #christiankern #bundeskanzler“) I emailed Kern’s office and summarized my research on huge Soros influence in Austria. What I found out is mirrored by experiences f.e. in Macedonia where a Stop Soros-movement has been created. I named a lot of NGOs, projects, networks, umbrella organizations on national, European, international level, conferences, forums, experts and legislative initiatives etc. who steer the dialogue on asylum, migration, gender, LGBTIQ issues and much more.

As I describe in this new article in German I pointed at a Facebook posting where I just wrote down what I remembered on Soros ties to Austria without looking my texts up. There are these groups, persons, organizations: dossier.at is a media project which aims at bashing everything which is Austrian and not migrant / refugee; they are members in the Soros funded Global Investigative Journalists network. When the Panama Papers were published in different MSM „Falter“ from Austria as a member of the International Consortium of Investigative Journalists (financed by Soros, Ford Foundation, Carnegie etc.) was a partner. The Protestant Diakonie, the NGO Asylkoordination and the Integrationshaus are the Austrian members of the Soros-financed European Refugee Council (ECRE); the named three groups cooperate in offering advice to bypass the Dublin Agreement. The Catholic Caritas is also member but in this case Caritas Europe.

Asyl in Not had a project with „advisors“ from Soros-NGOs and is extremely fierce against every politician who doesn’t want mass immigration. The NGO IG Kultur got project funding from Soros which also means this group reprsents the overall Soros goal to abolish nation states via „diversity“ and „multicultural society“. As Christian Kern is the head of the Social Democrats it is an irony that he pretends to know nothing about Soros influence even if the party’s Bruno Kreisky Forum got money form Soros and invites OSF representatives. George Lakoff is a friend of George Soros as both support „framing“ (a NLP technique) and the author of the „Little Blue Book“ for the Democrats‘ election campaigns.

His co-author was Elisabeth Wehling who routinely is invited to the OSF and by European political parties and regularly interviewed in MSM. The Social Democrats ordered her to elaborate new definitions and descriptions of the „basic values“ and she attended meetings f.e. of the Social Democrat Academics (BSA). Wehling, Soros and Lakoff use and promote the manipulative „framing“ strategy to replace terms in order to push their agenda through. When in German „Flüchtlinge“ (refugees) as clearly defined in the Geneva Convention is replaced by „Schutzsuchende“ (seeking protection) this is a success of Soros. The former Vice Chancellor Erhard Busek (a Conservative and globalist) is on the board of the Soros organization Pasos as the CEO of Erste Bank Andreas Treichl is a member of the advisory board of the OSF. 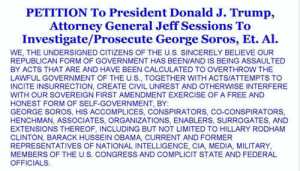 The Erste Group has a foundation which is co-organizer of conferences not only in Austria together with the OSF. And they employ the population expert Rainer Münz who said at public debates that 10.000 „refugees“ (= illegal immigrants) per day were no problem for Austria with its 8,6 million inhabitans. Research institutes like the Institut für die Wissenschaft vom Menschen (IWM) and the Ludwig Boltzmann Institut für Menschenrechte also have Soros ties (f.e. former UN human rights rapporteur Manfred Nowak). Of course networks who make propaganda for „open mindedness“ are Soros-funded like ILGA (LGBTIQ rights), ENAR (European Network Against Racism), Anti Poverty Network, Women’s Lobby (OSF pay f.e. the secretary general) show how influence is exercised via umbrella organizations. One interesting detail is that the Chancellor’s wife Eveline is business partner of Niko Pelinka and his wife while his uncle Anton Pelinka is professor at the Soros funded Central European University in Budapest. Eveline Steinberger-Kern, Niko Pelinka and Markus Wagner created the „Innovation Club“ which connects Austrian entrepreneuers with Silicon Valley (which belongs to the deep state).

Markus Wagners‘ partner Laura Rudas was a Social Democrat MP and party manager in Austria though she seemed to lack any qualifations; now she works for Palantir Technologies which started with CIA funding. In my email I warned Kern that Soros‘ goal is always to undermine the nation state by getting all differences between citizen and non-citizens disappear f.e. via destabilization by mass immigration. Then I  called Kern’s press speaker and send him some informations also about international research on Soros, regime changes and the connection between Soros and intelligence agencies. While A. Soros documents meetings with Democrats by posting pictures of handshakes in the case of Kern we only see a door shield on his Instagram page.

Kern denies any formal or institutionalized contacts with George Soros but probably met him at the World Economic Forum in Davos where he spent three days. At least he attended a conference where Soros Fund Management is among the sponsors as well as Saudi Arabia or Palantir. When questioned why three Members of European Parliament from the Austrian Social Democrats are listed as  Soros‘ „reliable allies“ (as about 30 % of EP) Kern and his office refused to answer. Cvetin Chilimatov from the Macedonian Stop Soros-movement describes the Soros strategy we watch unfold in many countries. The „civil society“ seems to be completely taken over as parties who set the „rights“ of illegal immigrations over the needs of the own population and the duties the government and state authorities have. The Soros goal at elections is to create a majority for opening all borders so Conservative politicians (and reasonable Social Democrats) are smeared and denounced in MSM. And Soros‘ „civil society“ cohorts are always willing to demonstrate, to riot and to campaign as we see now in the U.S.

PS: As this article on Zerohedge submitted by Wayne Madsen describes other European countries resist Soros while nobody in the Austrian Government (let alone security authorities or intelligence agencies taking action). Another analysis warns that a (Soros funded) color revolution is under way in the U.S. Everybody can stand up against this by countering those who are Soros vassals mostly without knowlegde. And concerning Europe it is useless to get angry about mass immigration because you have to uncover who is behind and who undermines your state.