Fake news MSM very quickly reported that according to Amnesty International 13.000 persons were executed in Syrian prisons over the last years. They didn’t even be so „fair“ to say that Amnesty itself is vague and estimates between 5.000 and 13.000 people being killed. Of course the Syrian Justice Department denied the accusations and stated that executions only take place after a legal several level procedure – but it is the voice of a dictator in our official narrative. The Government points at its successful fight against the US (deep state) and NATO backed terrorists and speculates that Amnesty should divert attention from that.

The „report“ was immediately critized in alternative media as it consists of hearsay mostly by persons who haven’t been in Syria for years (see Moon of Alabama’s analysis) and as Tony Cartalucci points out in was completely fabricated by the Amnesty headquarter in London. They engaged the compagny „Forensic Architecture“ to construct a 3D prison model based on satellite images and hearsay: „Amnesty International’s report lacked any actual evidence, with its presentation consisting instead of admittedly fabricated images, sounds, maps, and diagrams. Amnesty – lacking actual evidence – instead abused its reputation and the techniques of classical deception to target and manipulate audiences emotionally. What Amnesty International is engaged in is not ‚human rights advocacy,‘ but rather politically-motivated war propaganda simply hiding behind such advocacy. 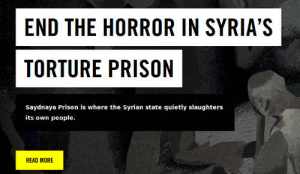 Exposing this technique of openly and shamelessly fabricating the summation of an internationally released report – promoted unquestioningly by prominent Western papers and media platforms, including the BBC, CNN, the Independent, and others – prevents Amnesty and other organizations like it from continuing to use the trappings of science and engineering as cover to deliver monstrous lies to the public.“ Of course we have the usual Amnesty and George Soros‘ Open Society Foundations link as it is the case with Human Rights Watch whose founder Aryeh Neier worked for the OSF see their website:

„Aryeh Neier is president emeritus of the Open Society Foundations. He was president from 1993 to 2012. Before that, he served for 12 years as executive director of Human Rights Watch, of which he was a founder in 1978. He worked 15 years at the American Civil Liberties Union, including eight years as national executive director. He served as an adjunct professor of law at New York University for more than a dozen years, and has also taught at Georgetown University Law School and the University of Siena (Italy). Since 2012, he has served as Distinguished Visiting Professor at the Paris School of International Affairs of Sciences Po.“ (The ACLU also gets Soros funding see present activities against Donald Trump) When Amnesty fought in 2012 for Pussy Riot many people realized that it was a propaganda operation against Russia as it started in the US:

„A glance at AmnestyUSA.org reveals that each and every front the US State Department is currently working on and has prioritized is also coincidentally prioritized by Amnesty International. This includes rallies and campaigns to support US State Department-funded Russian opposition groups (currently fixated on ‚Pussy Riot‘), undermining the Syrian government, toppling the government of Belarus, and supporting the Wall Street-London created Aung San Suu Kyi of Myanmar (still called by its British Imperial nomenclature of ‚Burma‘ by Suu Kyi herself).“ 2012 an aide of  Foreign Secretary Hillary Clinton became head of Amnesty USA. 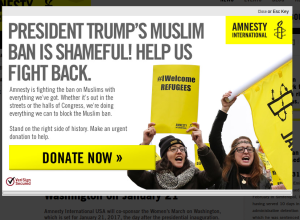 To those readers who understand German I recommend an in-depth analysis by Dominic H, a Swiss student with Arabic roots who defines himself as a leftist. He describes not only how „humanitarian engagement“ is connected with the war agenda but points at former Amnesty lies (alongside with HRW) f.e. concerning Libya. In order to justify illegal mass immigration into Europe Amnesty now reports horrible abuse of „refugees“. They might in such cases even tell the truth but then they mourn about human suffering they helped to cause. On board when regime changes and wars are prepared you always find campaign organizations like Avaaz who lobbyed per petition for a no-fly-zone, as they repeated when Syria was in their focus. In Germany not only Avaaz and Amnesty etc. spread disinformation as the Center for Political Beauty (also promoting open borders) agitated against Libya.

As the screenshot from the page of Amnesty USA shows they are always in the midst of the staged protest mainstream (and attented the Soros‘ funded Women’s March). A new article by William Craddick at ZeroHedge shows how destabilization, regime changes, wars and Soros‘ agenda of promoting mass migration fit together. It begins looking back: „In November 2016, a number of NGO’s were revealed by independent European news source GEFIRA to be smuggling migrants from the northern coast of Africa across the Mediterranean into the EU using a ramshackle fleet of ships. Research by Disobedient Media shows that a number of the organizations sponsoring ships in the armada are funded in part by Hillary Clinton donors and organizations run by billionaire George Soros. The actions taken by sponsors of ships in the fleet may be illegal under EU law and possibly run the risk of aiding ISIS operatives hiding among the migrant population.“

Note that illegal and criminal actions are described which becomes important concerning attacks of Soros vassals on the new US President and growing anger in Europe about Soros. It was Hungarian Foreign Minister Peter Szijjarto who spoke in a RT interview about Soros‘ efforts to bring down the Government f.e.via more than 60 NGOs serving as front organizations. Hungary now demands transparency concerning foreign funding, which is labelled by the Austrian (Bilderberger) newspaper „Der Standard“ as force against „nasty NGOs„. ZeroHedge describes the web of human trafficking activities of NGOs: „Information uncovered in an investigation by Disobedient Media has revealed that several of the NGO groups involved with the migrant fleet have received funds from George Soros aligned organizations or financial backers of Hillary Clinton.

The Migrant Offshore Aid Station (MOAS) was founded in 2014 by entrepreneurs Christopher and Regina Catrambone. MOAS operates the ships the Topaz Responder and the Phoenix in the migrant fleet. Mr. Catrambone was listed as a major donor to Hillary Clinton, giving over $416,000 to her presidential campaign bid in 2016. Another major supporter of MOAS is avaaz.org, who donated €500,000 to MOAS’ “search and rescue operations.” Avaaz.org was founded by Moveon.org, an American organization owned by George Soros. Avaaz.org acts as the European branch for Moveon.org. NGO group Save the Children operates the Astral in the migrant fleet. Save the Children is supported in part by George Soros’ Open Society Foundation. Médicins Sans Frontiéres (MSF) also operates several ships in the migrant fleet – the Dignity 1, the Bourbon Argos and the  Aquarius. MSF has also received funding from the Open Society Foundation.“ 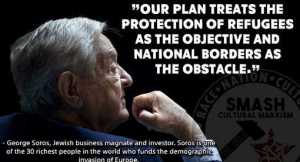 After the December 19th terror attack in Berlin Avaaz which presented itself as a „global citizens movement“ invited the people to a „Singing against terror“-event directly opposite to the Christmas market at the Emperor Wilhelm Church. As Avaaz is a front of the war party these naive „welcomers“ didn’t sing „Kumbaya“ etc. against but for terror. Now Dresden remembers the British Airforce raid in February 1945 which killed – most of them burned alive – many thousand citizens, refugees and people from occupied territories forced to work.  The Women’s church was burnt in the firestorm but collapsed the next day; it was rebuilt some years ago and reopened in a great ceremony. On such a symbolic place three busses ware placed vertically copying a barricade erected by Ahrar al-Sham-terrorists in Aleppo. Breitbart quotes the Council on Foreign Relations‘ analysis „The Good and Bad of Ahrar al-Sham: An al Qaeda–Linked Group Worth Befriending”.

Meanwhile the „monument“ in Dresden (funded with 200.000 Euro by a culture foundation with Martina de Maziere on its board, who is the wife of the Interior Minister)  is protected by the police due to protests. It brings us back to the ZeroHedge article as terrorists are infiltrating Europe via Soros funded „NGOs“: „No matter what good intentions might be behind the decisions of these various NGO groups to operate ships in this fleet, they are likely illegal and are in effect subverting European law. The financial involvement of George Soros and other big name supporters raises questions about the true intentions of various sponsors operating ships within the fleet. Many of the migrants seeking entry to the EU are not refugees and are attempting to enter for purely economic reasons. Even more concerning are recent reports that terror group ISIS has begun to dominate the trafficking networks in North Africa and is actively recruiting members from among the migrant population with promises of small amounts of cash and guaranteed safe passage into the EU.

The involvement of ISIS in human trafficking and recruitment indicates that there is a very real possibility that the NGO groups operating ships within this fleet may be (intentionally or not) aiding and abetting terror by transporting undercover operatives into the EU.“ Various NGOs (better call them intelligence fronts) are used to manipulate the public to believe that its about escape immident danger to be killed and not about destabilization and destruction via „resettlement“ of Muslim men in Europe. There are striking parallels between efforts to impose a plan for „large-scale resettlement“ developed by a Soros funded think tank on Europe and the official and open cooperation between the Canadian Government and Soros. Amnesty is as well as Médecins Sans Frontiéres and others among the fronts who pressurize f.e. the Austrian Government with their fake refugee agenda to act against the own state’s and the own population’s needs.

PS: On the fake Amnesty agenda also in German with more sources. And I recommend websites like The Art of Annihilation and Wrong KInd of Green where a lot of work has been done. As MoveOn was mentioned it is interesting to know that this front (which is heavily involved in anti-Trump activities) is a member of the OPEN network founded by Ben Brandzel (before at MoveOn and at Avaaz). In 2015 the „new“ campaign organization „aufstehn.at“ was launched in Austria which is also a member of OPEN and „stands up“ (that’s what „aufstehn“ means) against Interior Ministers, state borders and „hate speech“ etc. (see this article). In Germany not only Avaaz, but also Campact is used to push the globalist agenda – and of course another member of OPEN. And in Dresden a „cemetry of refugees“ in front of the Semperoper shows 99 images of the graves of persons drowned in the Mediterrian (who were no refugees according to international law. „Lampedusa361“ was realized by „Friends of Dresden“ chaired by Heidrun Hannusch who works for „Die Zeit“ whose editor said on TV that „murder in the White House“ would be „a possibility“ to get rid of Trump.

2 Gedanken zu “NGOs as part of the war agenda”